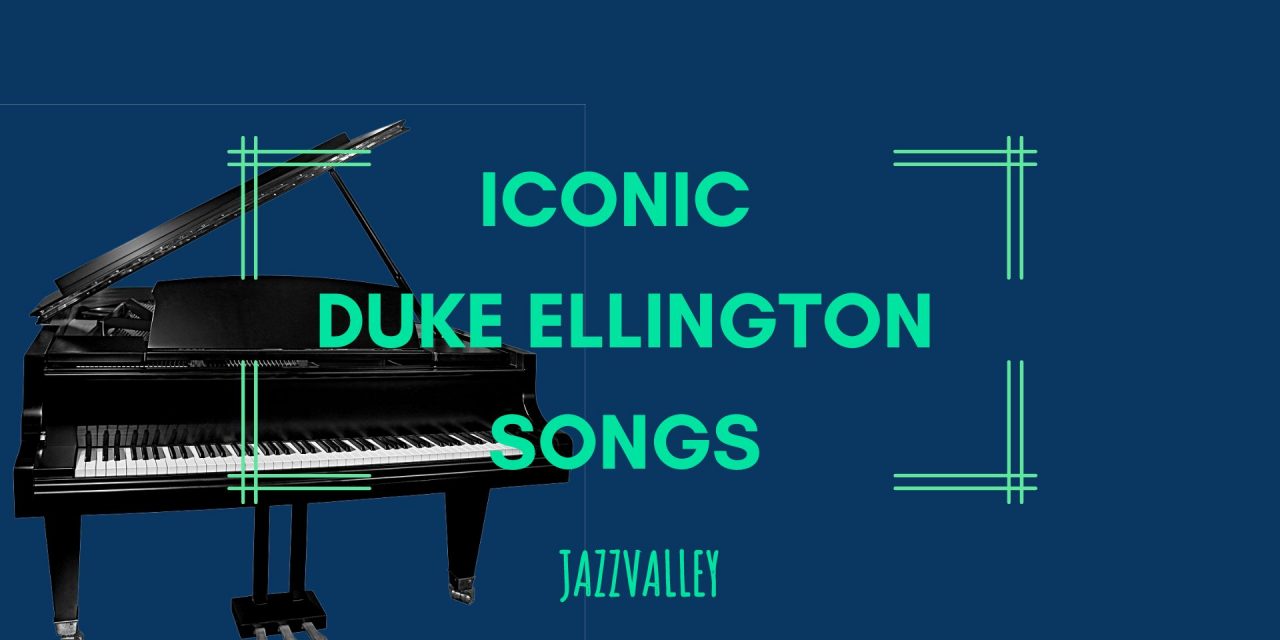 As part of our deep dive into the best jazz songs of all time, we take a look at some of the most famous compositions of Duke Ellington – aka the most famous jazz composer of the 20th Century.

Edward Kennedy Ellington was born and raised in Washington D.C. on April 29, 1899, and acquired the nickname Duke due to his regal manner and presence.

Famous for leading his own band for more than fifty years, from his early smaller ensembles in the early twenties who performed at Harlem’s famous Cotton Club, to the Duke Ellington Orchestra that he led until his death on May 24, 1974. D

During this time many of the leading soloists in jazz would be a part of his varies bands including saxophonists Johnny Hodges, Ben Webster and Harry Carney, trumpeter Bubber Miley and Tricky Sam Nanton.

In addition to his career as a bandleader he is also one of the most prolific and revered composer in jazz. He became a master at writing the perfect three minute composition for the 78rpm discs of the day, and was equally adept at writing longer form compositions with the advent of the LP in the 1950s.

Duke is said to have written more than a thousand compositions, and from 1939 until 1967 many of these would have been written with his composer and arranger Billy Strayhorn.

Take The A Train

Written in 1939 and with the most well known commercial recording in February 1941 and afterwards these composition would quickly become the Ellington Orchestra’s theme tune.  The title refers to directions sent to Strayhorn by Ellington on how to reac his house via the subway trains running from Brooklyn to Harlem and onto Manhattan.

Not actually an Ellington tune, but composed by Billy Strayhorn upon joining Duke as a writer the composition has become indelibly linked to Duke and one of the most recognised pieces in the band book.

Other famous versions include:

In a Sentimental Mood

Written in 1935 and according to Duke, “we had played a big dance in a tobacco warehouse, and afterwards a friend of mine, an executive in the North Carolina Mutual Insurance Company, threw a party for Amy. I was playing piano when another one of our friends had some trouble with two chicks.”

To calm the situation down, Ellington said that he composed the tune with one of the girls on each side of him at the piano. Lyrics have been added to the original compositon by Manny Kurtz but are seldom sung. A common practice at the time, Irving Mills who was Duke’s manager also listed himself as composer on the publishing rights.

One of Duke’s most famous ballads ‘In A Sentimental Mood’ has become a jazz standard, and a piece that Ellington would record many times with his Orchestra and in 1963 with saxophonist John Coltrane. A classic reading of the tune, Coltrane and Duke changed the key to Bb minor from the original key of F major.

I Got It Bad and That Ain’t Good

Written in 1941 by Duke with lyrics by Paul Francis Webster, and introduced that same year in the music review Jump For Joy. Sung by Ivie Anderson who would go on to be the featured female vocalist with the Ellington Orchestra.

In October 1941 Ellington took the band into the studio to record the song with Ivie Anderson and featuring solos from Duke amd Johnny Hodges. A month later Benny Goodman would also record the tune with Peggy Lee on vocals, and this would become Lee’s first hit vocal.

In A Mellow Tone

Also known as ‘In A Mellotone’ the composition was written by Duke in 1939 with lyrics by Milt Gabler and based on the chords of ‘Rose Room’ written twenty years earlier.

Duke’s original recording of the tune also featured his alto saxophonist Johnny Hodges. This period of Duke’s career from 1939 to 1942 is often regarded as classic Ellington with Duke wiriting ‘Ko-Ko’, ‘Warm Valley’ and ‘Jack The Bear’ all in a short period of creative writing.

A joint composition by Ellington and Billy Strayhorn in 1967 and formed part of the suite that became know as The Far East Suite. The suite was a jpont project inspired by the bands tour of Asia, and ‘Isfahan’ was a tribute to the city in Iran and a feature for Johnny Hodges.

Strayhorn wrote the basis for the composition, originally titled ‘Elf’in 1963 and the piece completed as ‘Isfahan’ is one of Duke and Strayhorn’s most beautiful compositions. Recorded in December 1966 it was one of the last of Duke’s albums to feature compositions by Stayhorn prior to hsi passing in May 1967.

I Let A Song Go Out Of My Heart

Another song from Ellington’s prolific period in the 1930s. Written in 1938 with lyrics by Irving Mills, Henry Nemo and John Redmond, this would become a big hit for Due reaching number one in the charts that year.

It’s said that the song was written as part of a series of songs for a show the Cotton Club Parade of 1938.  The story is that that the Duke wrote twelve pieces for the show and because of superstition the thirteenth, ‘I Let A Song Go Out Of My Heart’ was withdrawn from the show.

Written in 1936 by Ellington and trombonist, Juan Tizol this is another of Duke’s instantly recognisable compositions, although its origins stem from a musical idea played by Tizol ad lib and out of tempo.

Ellington liked what he heard and he and Tizol sat down and worked out the remainder of the tune together. Again, lyrics were added by Ellington’s manager Irving Mills, presumably to get in on the composer credits and  any subsequent royalties.

Ironically, Tizol was given an flat fee of $25 for his contribution but later Mills agreed that the trombonist receive a share of the royalties.

The first recorded version of the tune was recorded by Barney Bigard and His Jazzopators in a band that featured Bigard on clarinet with Cootie Williams on trumpet, Juan Tizol, Due Ellington, Harry Carney on baritone sax, Billy Taylor on bass and drummer Sonny Greer.

It was not unusual for members of a band, in this case Duke’s Orchestra to record together in smaller ensembles under different bandleaders and names.

An early composition, ‘Black And Tan Fantasy’ was written in 1927 by Duke Ellington and Bubber Miley.

A trumpet player in Ellington’s band, specialising in the use of the plunger mute, Miley and Ellington recorded the song numerous times for different labels such as Okeh, Victor and Brunswick under the name of Duke Ellington and Washingtonians.

The most revered of these is the Victor recording whcih has been inducted into the Grammy Hall Of Fame. Another song that would remain in the Ellington band book for several decades, and always featuring the trumpet played with a plunger mute producing a very plangent and vocalised sound.

Thanks for stopping by!

Check out our guide to the most popular jazz instruments, and the musicians – such as Miles Davis and John Coltrane – who made them famous…