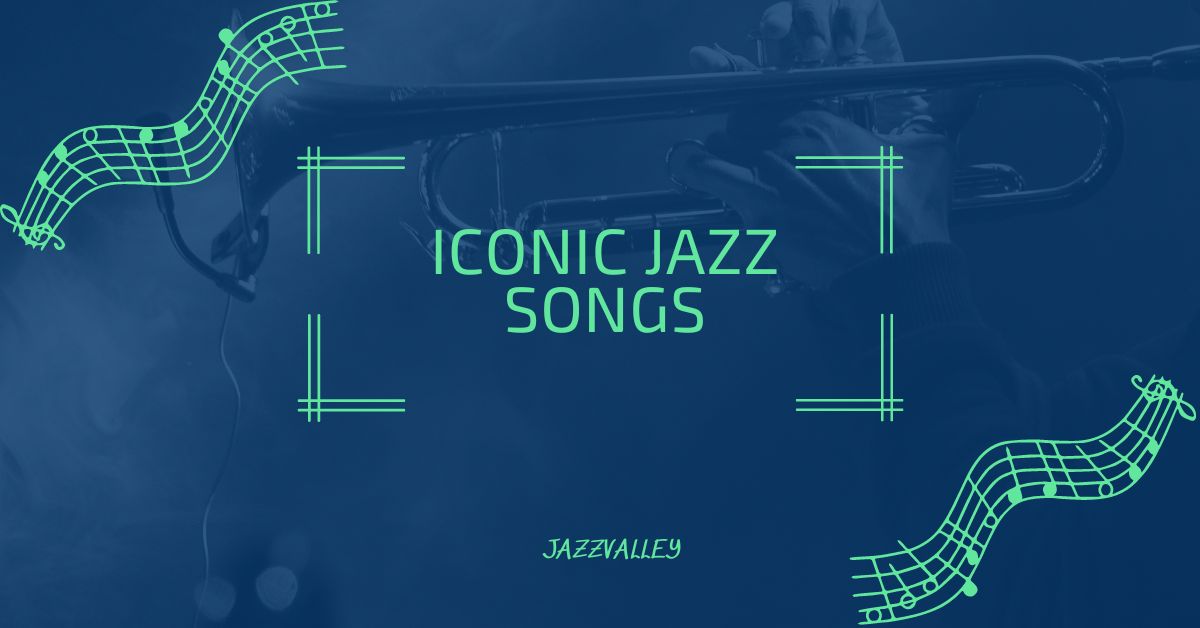 Whilst the topic of ‘best jazz songs’ is fraught with disagreement, coming up with a selection of the most famous is a slightly less daunting matter…

If you look at most lists, though, they almost always roll our the same selection of bestselling songs.

The problem – for musicians – is that they end up getting asked for the same songs over and over again.

So, to try to balance things out a bit, we’ve rounded up 10 famous jazz songs which are (in our opinion at least) slightly underrated by the general public.

So, taking into account the number of versions out there, the popularity of the most iconic renditions and a heavy dose of personal preference, here’s our list of 10  famous jazz songs that you might consider next time you ask a local band for a request.

Whilst any list is bound to be subjective, here are 10 compositions which we hope will give you as much pleasure discovering as they did for us!

This is without doubt Monk’s best known composition, and one that almost immediately became a standard in the jazz repertoire.

It has subsequently been recorded by a whole host of artists across multiple genres, and the most recorded standard by a jazz musician.

The melody is like no other Monk composition but paradoxically could have been written by no one else.

There are many great versions of the ‘Round Midnight’ available with exemplary reading s by Ella Fitzgerald and Sarah Vaughan, but there is perhaps no better place to start than Monk’s original recording for Blue Note in 1947, and available on Genius Of Modern Music Volume 1.

Its gentle melody is the perfect piece on which to finish after the tumultuous ‘Eye Of The Hurricane’ and ‘Survival of the Fittest’, and the gentle and regular pulse provides some much needed relief.

Freddie Hubbard’s trumpet solo begins with a perfectly judged opening melodic line that feeds of Hancock’s theme, and his solo is a beauty.

George Coleman follows with a solo that is equally lovely, although his phrasing is a little tougher and edgier.

Hancock’s shift from accompaniment to his solo is done with great thought and gentle subtly with a sure sense of space which bass and drums do not feel the need to fill.

This creates a wonderful tension that is then relieved as Hancock’s solo progresses.

Written in 1931 by Duke Ellington with lyrics by Irving Mills, this would rapidly become one of Duke’s best loved tunes and become accepted in the realm of jazz standard.

Duke would often record this song, but there can be few better than the version recorded with vocalist Ivie Anderson for Brunswick on February 2, 1932.

Joe Nanton provides a memorable trombone solo before Ivie sings the lyrics with a perfect sense of timing and swing.

Ellington’s star soloist Johnny Hodges plays one of his impeccable solos before the band pick up the theme before Anderson’s brief scat bringing the piece to a close.

The story of the group Weather Report can be split into two chapters, pre-Birdland and post-Birdland.

Featured on the group’s Heavy Weather album released in 1977, Joe Zawinul’s composition ‘Birdland’ saw the band’s popularity soar, and sales of the album were unprecedented for a jazz album.

The composition proved to be a massive selling point for Weather Report with its catchy melody, and spectacular bass lines from Jaco Pastorius.

From start to finish the piece is beautifully written and arranged by Zawinul. The melody is instantly memorable, yet does not over exploit it.

The composition follows through it natural course with variations on the theme and at one point the melody is carried not by saxophone or keyboards but by Jaco’s fretless bass guitar.

Zawinul makes full use of the instrumentation at this disposal, and the use of vocals and handclaps that bring the piece to a conclusion against the repeat of the melody by Pastorius and Zawinul’s synth solo in the fade retains interest to the very end.

Written by the pianist and first recorded as a solo piece composition of his debut album New Jazz Conceptions in 1957.

The piece only plays for less than a minute and half but leaves a deep and lasting impression.

It has a beautiful melody that is simply stated at the beginning, with Evans’ typical uncanny use of space and touch at the keyboard.

As the piece progresses he appears to gather up the melody and swathe it in chords yet still retaining the melody that is clearly heard throughout.

One of his best known and popular compositions Evans’ would go on to record this tune many times, but none can be better than the version that appears on the live album Waltz For Debby recorded at the Village Vanguard in 1961 with bassist Scott LaFaro and Paul Motian on drums.

The interplay between the three musicians is stunning and reaching new heights of communication with an incredible solo from LaFaro.

This originally issued version was take 2, with a later CD release of the album containing an alternative take 1 that is quite different in the way the trio feel their way through the tune, and a very different solo from the bassist.

Originally called ‘Miles’ on the sextet album the trumpeter recorded for Columbia in 1958 Milestones, and not to be confused with the tune of the same name written by John Lewis in 1947, is modal composition that would to lead the way for further explorations with this way of improvising over modes or scales the following year on Kind Of Blue.

The recording of ‘Milestones’ by the sextet is remarkable for many reasons, not least for the apparent directness and simplicity of the composition that disguises the underlying complexities.

Based on just two modes, G Dorian for 16 bars, A Aeolian for another 16 bars, and then back to G Dorian for the last eight bars, the tunes is remarkably memorable and the soloists all take very differing approaches.

In a deceptive manner the tune appears to change tempo, but in actually retains the same throughout. The first 16 bars are a bright and spritely, while the following 16 bars appear to slow the tempo.

This is done by changing the note values from punctuated crotchets to longer minims and drummer Philly Joe Jones disturbing the tempo with his rimshots falling on irregular beats in the bar, before the return of the original theme for the last eight bars.

The form is kept throughout the piece, and CannonballAdderley solos first is an ecstatic blues inflected solo. Miles solos next on flugelhorn, as opposed to his usual trumpet, in a typically refined and restrained solo.

The last solo is taken by John Coltrane who come bursting in with an exuberant solo, multi noted yet deeply profound and lyrical.

Recorded by Billie Holiday in 1939 ‘Strange Fruit’ caused much controversy upon its release, and dealt with an issue that many Americans would have preferred had been swept under the carpet.

The music and lyrics were written by Abel Meeropol under his pseudonym Lewis Allan.

Protesting the lynching of Black Aericans which was an increasing occurrence in the Southern States the song made for uncomfortable listening, so much so that her record company, Columbia and her producer John Hammond refused to record it.

Turning to her friend, Milt Gabler, for help Billie apparently sang the song to him a cappella.

Gabler was apparently reduced to tears upon hearing Billie sing the song and agreed to record it for his Commodore imprint.

The recording is remarkably stark with a brief opening statement from the eightpiece band, and the improvised introduction is by pianist Sonny White.

Billie is not heard until more than a minute in to the song but her entry is quietly chilling as the lyrics unfold.

While courting much critical acclaim and also criticism for recording such a protest song, ‘Strange Fruit’ is now indelibly linked to Holiday and one that she would perform throughout her career.

It is strange how fate can play such a big part in the life of a song and the musicians who created it.

Dave Brubeck’s fascination with unusual time signatures resulted in the album Time Out recorded in 1959, and one of the pieces recorded would be a big hit propelling the career of the pianist and composer/alto saxophonist forward in a way that could not have been predicted.

Written as a piece is 5/4 time to feature drummer Joe Morello, Paul Desmond unwittingly came up with such a catchy melody that it was immediately accepted with an audience unfamiliar with jazz of the complexities inherent in making the composition work.

The piano vamp and Desmond’s melodic light toned alto saxophone set things up nicely for Morello’s solo, which is played out over Brubeck continuing the vamp.

This repetitive figure on the piano is perhaps what kept the casual listener’s attention span while the real magic occurs with Morello’s command of time and inventive drumming.

A wonderful and timeless tune that has developed a life far beyond the composer’s intent, and that continues to delight.

With lush big band arrangements by Russell Garcia, this was the perfect setting for Ella and she certainly made the most of it.

It has often been suggested that Fitzgerald and Armstrong were not obviously the most compatible but history and public taste has ridden rough shod over that theory, and the recording sound remarkably fresh today.

‘Summertime’ is one of the stand out performances on the album, and one of the finest versions ever recorded.

Ella is at the peak of her powers, and if Louis cannot match her vocally his haunting trumpet prior to her entry is a show stopper.

A model of timing and execution it is flawless, and it is to Ella’s credit that matches the quality of Armstrong with her highly emotional voice. The tempo is slow and her enunciation and timing is impeccable.

Written and recorded by Charlie Parker for his recording session for Dial Records, this captures the saxophonist in remarkably good health and in absolutely cracking form musically.

The former is due to an enforced six month stay at Camarillo State Hospital in California which would have resulted in Parker eating well and being alcohol and drug free.

Prior it his incarceration he had recorded ‘Lover Man’ for the label and the results are shocking to hear to this day.

Parker is barely able to function, and it is hard to believe that this is the same musician playing here.

Parker sounds relaxed and happy, and the tune is a has joyous lilt to the melody.

Bird solos first and his tone is secure and strong, and his melodic idea flow effortlessly. Tenorist, Wardell Gray , and Barney Kessel on guitar also solo convincingly, but it is Parker’s solo that remains in the memory.

If you’re feeling inspired to discover more, head to your favourite streaming platform or record shop and dive into more from these artists.

Looking for more info on the periods these came from? Check out guide to the most famous types of jazz from the last century.