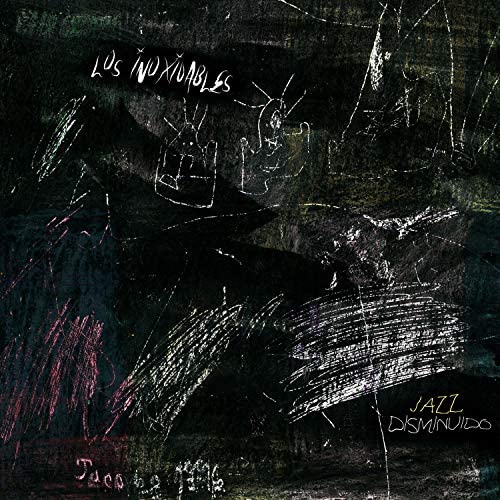 Jazz Disminuido is a recent album, led by the Mexican composer Jacobo Cerda in the company of his ensemble, Los Inoxidables, who –now in a trio format– came to stir our synapses with a bizarre picture of pure free improvisation.

The fabric of this work ranges from a vast timbral transformation, achieved thanks to real-time electronic manipulations, to strange rhythms and phrases that jump between comfortable lines and unpleasant spaces, reminding us that art can challenge aesthetic notions and at the same time be stimulating.

The album is delivered from the deepest of emotions and a strong connection between the members of his ensemble and, in turn, projects a considerable capacity to engage his listeners.

Being alone for a while with Jazz Disminuido is a sonic experience that evokes visual imagery.

It is a sensory and imaginative stimulus that takes influence from different decades and amalgamates them to a single style: it ranges from psychedelic jazz to Latin music, European jazz, smooth jazz and electronic music, even if it doesn’t sound like any of these genres… and sends the listener into a surreal place.

It is clear that it is a matter of going beyond the music itself, of injecting images directly into the vein. It is also surprising to recognize that all of this was accomplished by three people or, on some tracks, just two individuals.

In particular, I consider it a great achievement when a small ensemble (in size, but not in imagination) works so well that it does not need to overcomplicate itself to achieve sonic success.

Furthermore, I see that to understand Jazz Disminuido we must stop to comment on a key concept: free jazz and free improvisation are different things.

Free jazz is a work composed of different elements and ideas that were innovative for their time.

Ornette Coleman for example, father of free jazz, theorised and composed musical fragments with three or more harmonic lines and contrasting rhythms for his ensembles to explore.

On the other hand, with free improvisation the dynamic is different: here there is nothing written and everything is possible.

Everything remains in the hands of the performer as long as an aesthetic order is maintained, which brings up huge questions, like… can anyone do free improvisation?

Is Yoko Ono an artist when she starts screaming in the middle of the museum? Hence a heated debate gets in the way before we can see further.

Perhaps anyone can do free improvisation, but not everyone will be able to make art out of it. This is actually very easy to visualize, whether you are a musician or not. It is a matter of sheer honesty.

On the one hand, if you have sufficient musical training, there is a developed ability to notice the presence or absence of the creative elements that are used at the time of a completely improvised musical presentation, and there is knowledge that makes it possible to determine in tangible terms whether the performance reflects an internalization of music theory, or whether there is some innovation in the performer’s work.

Wow, geniuses are only made after years of constant study and that is undeniable.

On the other hand, those who are not musicians can also listen to their intuition. The listener’s concentration is enough to be immersed in the musical product to the point of moving towards a quasi-meditative state, which Stravinsky called “psychological time”.

The internalized meaning that individuals give to music has the power to detach ourselves from the passing of the hands of the clock. When we witness a real work, time tends to fly by.

Now, the reality is that many free improvisation performers move on to musical debauchery: nonsense, through which they reveal their narrative limitations, due to a lack of ideas and concepts (not only musical, but also ideological and expressive) that allow them to establish a solid structure.

This is especially noticeable when compared to professional musicians who have spent years of practice and consistent study to internalize the sound.

They craft timbral explorations and draw upon rhythmic, melodic and harmonic identities from their subconscious, and in the case of an ensemble, in addition to all of the above, they manage to establish communication between its members.

Here a third point is raised: a work can be liked by anyone or not, but that does not add or take away from artistic quality. This is what we must face before making any statement.

After saying all of the above, I invite my kind reader to attempt two experiences.

The first is that before rejecting or blindly accepting free improvisation, taking time to identify performers or (professional) ensembles of that genre whom you can appreciate.

There are those who applaud concerts when all their logic tells them that what they hear is a scam, just as there are individuals who completely reject the possibility of opening their perceptions to creative horizons that are unfamiliar to them, when this music is certainly an adventure into the unknown.

The second is to dare to listen to Jazz Disminuido.

It is impossible to deny the artistic qualities of this work. And, very important: consume this work from start to finish, without distractions, alone, or with people who don’t make noise, and with good speakers or headphones.

At the time, maestro Cerda told me that this album was made in a situation of sadness and inspiration experienced by himself and the members of his project.

However, they decided to get to work to “see what happened.” What an irony, because what happened from his experiment was a record capable of touching the soul.

Another curious fact is that the names of each piece of the album were created in consensus by the band, after taking into account the opinions of several listeners to whom the project was presented individually before releasing it.

Interestingly, these subjects commented that they had ideas and feelings that were very similar to each other when experiencing Jazz Disminuido. Daring to live the work earned us the enjoyment of a true artistic experience.