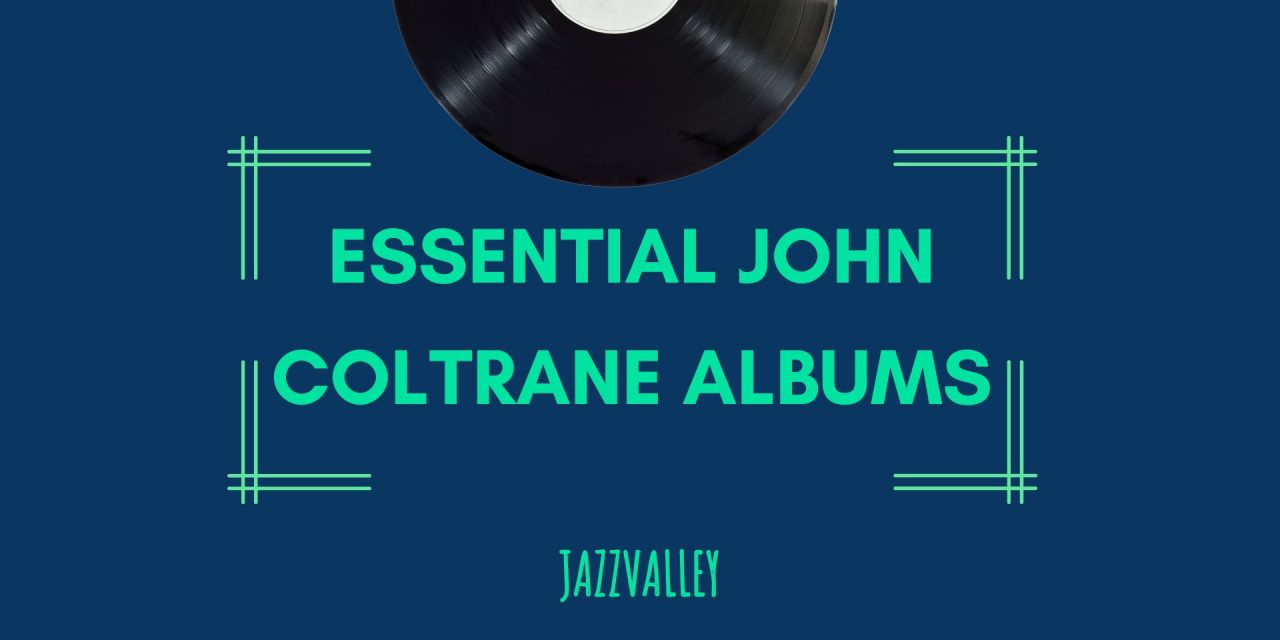 An undisputed giant of the music, American saxophonist John Coltrane recorded at a regular and steady rate charting his progress with a string of classic records along the way.

Here of just five of the most important and influential John Coltrane albums.

An early classic, and Coltrane’s only album for Blue Note, Blue Train was one of the saxophonist’s first outings as a leader.

While still playing very much in the hard bop style as he had been with the Miles Davis Quintet the album gave notice of a new direction that Coltrane was keen to explore.

Assembling a sextet that featured a young Lee Morgan on trumpet and trombonist Curtis Fuller gave the frontline a more complex sound, but it was the solos that were important. Coltrane is immediately setting the standard with his solo on the album’s title track. After a simple but effective them statement Coltrane starts his solo.

With his by now granite hard tone his solo is bursting with ideas. Long notes, fast flurries, all played with an iron control and grip on the music. It is possible to hear in this one solo ideas and motifs that would be explored in more detail in the years to follow.

The rest of the album is a more conventional. Coltrane gets in another great solo on ‘Locomotion’, but nothing quite ignites in the same way as the title track. Lee Morgan acquits himself well as the rest of the set settles into more familiar hard bop territory, and Curtis Fuller and pianist Kenny Drew also get in some neat solos.

An album that suggests that the saxophonist is now ready to strike out his own, although it would be another three years before he formed his own permanent quartet, and that serves notice that Coltrane is looking beyond the hard bop and modal vocabulary of the day.

This is the breakthrough record. Yet to form his own regular quartet, Coltrane had signed with Atlantic Records with whom he would record four albums in total. Giant Steps is the album that just keeps giving.

The title track was revolutionary at the time of release with its harmonic movement and has become a test piece for jazz musicians everywhere.

As the saxophonist seemed to be moving away from conventional hard bop, he also began to write more. Perhaps to better find a framework for the ideas he had for developing his improvisations, but this also revealed him to be a fine small group composer.

This is the first album that Coltrane recorded that featured all original compositions, and incredibly all of them have become part of the standard jazz repertoire.

The album packs a lot in. The up tempo pieces are exhilarating and point to new directions for small group improvising, and the ballads reveal how Coltrane can explore his unique sound on the saxophone a gentler tempo.

The recording sessions did not all go smoothly, and with such demanding tempos and difficult compositions, even with players of the calibre of Tommy Flanagan, Paul Chambers and drummer, Art Taylor, there were problems to iron out.

In fact, an early session for the album with pianist Cedar Walton and drummer Lex Humphries were deemed unsuitable for release at the time and have subsequently been made available as alternate takes on reissues.

However, it is recommended that the album should first be heard in the originally released running order.

If Giant Steps was the first all-out classic Coltrane album, then My Favourite Things was the release that was to bring wider popular acclaim.

Recorded in October 1960 this is the first outing for the saxophonist on soprano saxophone. Reportedly a gift from Miles Davis before the Coltrane left the group, the saxophonist had been initially fascinated by Sidney Bechet’s recordings on the instrument.

A first it may have been for Coltrane, but his soprano playing on the song ‘My Favourite Things’ instantly caught the attention of critics and jazz fans alike. Written by Oscar Hammerstein II and Richard Rodgers for the film The Sound Of Music, Coltrane took the attractive melody and converted it into a modal extravaganza.

Taken at a waltz tempo in ¾ time, Coltrane and McCoy Tyner play improvise over a vamp that lasts for more than thirteen minutes. The saxophonist’s sound in the soprano hints at an eastern feel, and it is incredible how with Elvin Jones inspired drumming how the performance can be maintained at such an intense level.

An edited down version was released as a single and became a surprise hit.

Along with another soprano feature on ‘Everytime We Say Goodbye’ and playing tenor saxophone on ‘Summertime’ and a blistering ‘But Not For Me’ this is another Coltrane album that should be in everyone’s collection.

This may well be one of the most best jazz albums ever recorded.

A suite in four parts in which Coltrane laid bare his emotions in a way hitherto only hinted at.

Recorded in one session on December 9th, 1964 and released the following year on Impulse! Records, the saxophonist described this as a prayer to God. The music is very devotional and can be widely regarded as one the first spiritual jazz records.

The session was mad with Coltrane’s classic quartet of McCoy Tyner on piano, Jimmy Garrison and drummer Elvin Jones. The album captures the group at the height of their powers, and Jones’s polyrhythmic drumming gives the feeling an uneasy restless feeling beneath Coltrane on the opening ‘Acknowledgement’.

Based on a simple four note motif, Coltrane investigates this from every possible angle, even repeating the phrase and changing key until he has worked his way through all twelve keys.

The album is super charged throughout with Coltrane in declamatory form. The notes come tumbling out of his horn, pushing the boundaries of the music through hard bop, modal and free jazz. Tyner and Garrison hold everything down as saxophone and drums continue to push forward until with ‘Part IV – Psalm’ tension is not so much relieved as heightened in this closing section of the suite.

The tempo is slowed right down as Coltrane recites through his tenor the prayer that is printed on the reverse of the album cover. As the music finishes the listener is left exhausted yet replete.

From here on in, nothing would be the same again. Coltrane would follow a new path leading his music further out, to explore the more spiritual side of his playing.

Hailed as a classic upon its release in 1966, the album divided opinion amongst many of Coltrane’s followers. There were those who had followed him since his days with the Miles Davis Quintet and Sextet and could simply not get past A Love Supreme as the saxophonist sought new avenues of expression.

For many, Ascension would prove to be a step too far, and even some of the musicians found the new music outside of their comfort zone. Indeed, with this record it would also signal the demise of the classic quartet.

On the 28th June 1965, Coltrane assembled a cast of eleven musicians in the studio. Comprising of his quartet, trumpeter Freddie Hubbard and some of the up-and-coming players involved in the free jazz movement including Pharoah Sanders and Archie Shepp.

The altoist Marian Brown described the resulting music on the original liner notes by A.B. Spellman as the sort of record “you could use… to heat up the apartment on those cold winter days”.

The music was structured with Coltrane having written parts with some chords that could be followed or discarded at the time of soloing. The ensemble would play to bridge the sections between soloists who be accompanied by the rhythm section only.

The music is often a glorious cacophony of sound and texture. The solos are often wild and grounded only by the limitations of the musician’s imagination and the insistence of the Tyner, Garrison and Jones.

Two takes of the music were recorded, each lasting approximately 40 minutes, and unusually two takes were actually issued within months of each other.

The originally released LP featured the first take known as Ascension (Edition I), however after the album had hit the shops Coltrane decided that he preferred the first take which was then released as Ascension (Edition II) using the same catalogue number, and only differentiated by EDITION II being marked on the vinyl. Both Editions are now commonly available on CD reissues.

With Ascension, Coltrane had firmly committed himself to the avant-garde and the New Thing and would follow this path until his death in July 1967.

Looking for more like this? Check out our round up of some of the most famous saxophone players in jazz or their modern counterparts.