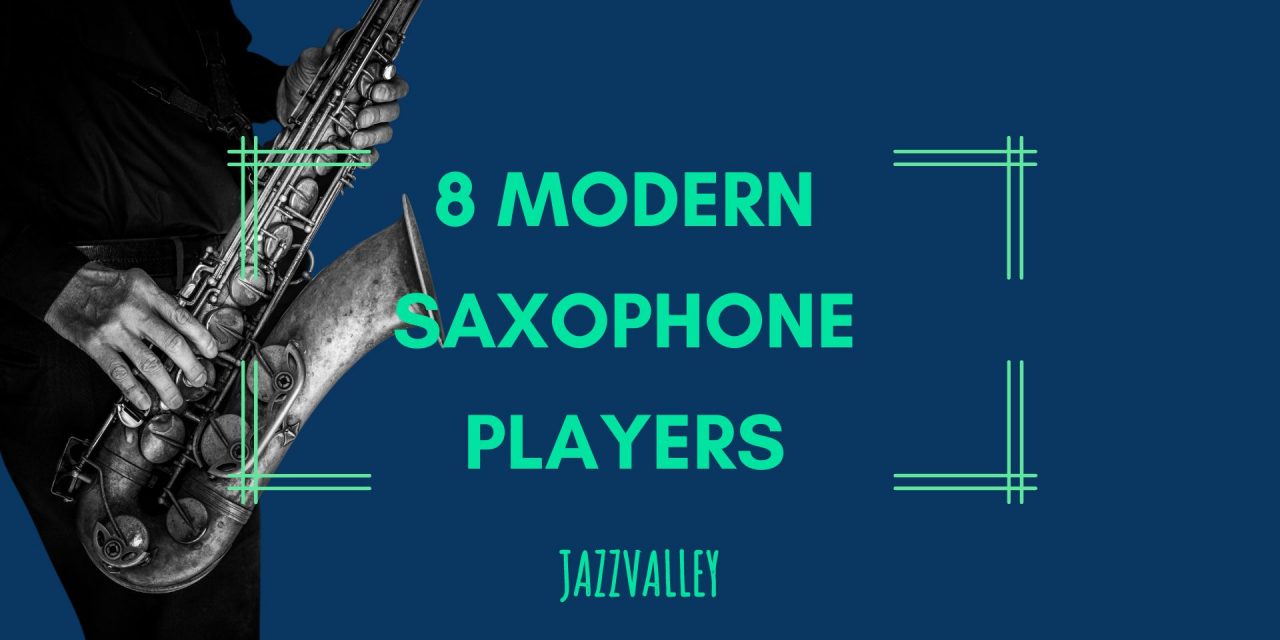 Join us for a brief biography and résumé of eight iconic modern saxophone players from the jazz scene. Touched by the greats who came before, they’ve all gone on to forge their own individual sound on their respective instruments.

One of the most influential alto saxophonists of his generation, Kenny Garrett plays in a style derived from hard bop, yet also encompasses funk, and occasionally strays a little too close to smooth jazz.

His later recordings have redressed the balance somewhat, and his playing is never short of totally committed to the music.

Once famously described by Miles Davis as wearing Sonny Stitt’s dirty drawers, the trumpeter held Garrett in high enough regard that he was in Davis’s band from 1987 until Miles’s death.

Garrett’s blues drenched tone was perfect for Davis at this time and has proved to be an effective calling card for the saxophonist. Over the course a recording career that began with his debut album as leader for Criss Cross in 1984, Kenny Garrett has remained true to his roots, the music he loves, and has frequently acknowledged his influences in his recordings.

He stands as one of the leading modern saxophonists who while steeped in the tradition still finds new and exciting things to say.

A musician’s musician, or an acquired taste?

Perhaps the answer lies somewhere in between. Turner has never looked to take the easy option. A lucrative contract with Warner in the 1990’s fizzled out by the beginning of the new millennium.

Despite the labels best efforts, it may have been too difficult to market a musician who was determined to follow his own path and whose music came across a little to highbrow for many.

But time has revealed a different perspective on this most original and creative jazz musician.

In a time when virtuosity appeared king, Turner kept his hidden. He plays with a full tone and command of the instrument and is a master of the altissimo register producing a pure sound that still whispers and caresses the ear.

The influence of Warne Marsh is evident in his playing, but never dominant and Turner’s individuality is always to the fore.

His discography is not vast, but his recordings are always worth a careful listen and the rewards greater than the sum of their parts.

In a career that is driven by patience and determination, Mark Turner has carved out a position in the music as one of the most creative and original improvisers on his instrument.

Taking up the saxophone at nineteen after hearing a John Coltrane record, Sheppard is a self-taught musician who has toured and recorded with some of the jazz greats.

He has the enviable accolade of having played the most important big bands of the last fifty years in the orchestras of Gil Evans, George Russell and Carla Bley with whom he has had a long association.

He has forged a career that has taken his music around the globe, and after recording acclaimed jazz albums for British labels and a brief tenure with Blue Note, in recent years he has found a home with ECM Records for which he has recorded four albums under his own name.

Soft On The Inside (Antilles)

Scottish saxophonist Tommy Smith is something of a child prodigy.

Taking up the tenor at school at the age of twelve, he quickly progressed and by the age of fifteen had several radio broadcasts under his name with international musicians, and a year later recorded his debut album.

That same year he was awarded a scholarship at Berklee College in Boston, and famously joined Gary Birton’s ‘Whizz Kids’ band. He recorded four albums for Blue Note Records, before returning to Scotland where he has been based ever since.

After a succession of recordings for Linn Records he started his own label, Spartacus Records in 2000 to release his own music and that of the Scottish National Jazz Orchestra of which he is the founder and director, and who are regarded as one of the world’s leading jazz orchestra’s.

Steeped in the history of the jazz as well having studied classical music in Paris, Smith’s music is broad in scope and concept.

He has recorded albums for Spartacus with John Scofield, Joe Lovano, Kenny Barron among others, playing standards, original compositions and the music of John Coltrane.

Embodying The Light: A Dedication to John Coltrane (Spartacus Records)

No one has done more in the last thirty years to raise awareness of black heritage in their music and has done so without compromise to his own musical beliefs and ambitions.

His debut album, ‘Journey To The Urge Within’ featured the classic jazz quartet line up yet refused to conform to the strictly American post Coltrane template.

He played an important part  in the formation of the Jazz Warriors big band that would feature many of the young jazz musicians that would follow Pine and have a lasting impression and influence on the UK jazz scene.

His music has not been bound by any boundaries, and his music encompasses jazz, reggae, and drum and bass. He has presented his own long running radio show on BBC Radio 2.

Surrounded by much hype and media attention in his early career has not always been a blessing for Pine but his self-belief and dogged determination has resulted in a long and productive career.

At the age of 58 Pine’s appetite for music is undimmed, and if at times he has not always been served well on record, it is possible that we have not yet heard the best from this enterprising artist.

Saxophonist, John Surman came to prominence in the bands of Mike Westbrook and Mike Gibbs, and the quartet with guitarist John McLaughlin in the late sixties.

Wielding the big baritone saxophone Surman was playing the instrument like it had never been heard before.

His playing could be tender and lyrical, or wild and coruscating utilising every part of the baritone’s range from the lowest notes in the altissimo register.

Born in Devon, Surman has never forgotten his West Country roots, and this has permeated his music frequently throughout his recordings.

He has a worldwide reputation as one of the leading exponents of the baritone saxophone, along with his innovations on the bass clarinet.

He has recorded and performed with Paul Bley, Paul Motian, Bill Frisell, as well as with string quartet, choirs and big bands.

He has also produced some highly original albums as a solo artist using the studio to overdub saxophone and clarinet parts over rhythmic and textural synthesizer loops. His recordings for ECM over the last four decades have alone produced a rich and varied discography.

A Biography of the Rev. Absalom Dawe (ECM)

His saxophone sound is perhaps more readily identifiable than other, and his music has broad appeal outside of the normal confines of jazz.

Jan Garbarek is unusual that he has remained faithful to one label, with all his recording being released on ECM records. In at the beginning of the imprint, it is said that Garbarek’s keening saxophone sound has helped define the label’s identity.

In fairness to ECM founder and producer, Manfred Eicher, he has given Garbarek a free rein allowing the saxophonist to hone his individual sound on both tenor and soprano saxophone and explore different contexts to place his sound.

From quartets with guitar in the seventies and keyboards in the eighties, the Jan Garbarek Group has carved out an impressive discography.

In addition, Garbarek was a member of Keith Jarrett’s European Quarter,has explored Indian music and attained huge success with his collaboration with the English vocal quartet, the Hilliard Ensemble.

Norwegian saxophonist Seim made his debut recordings for ECM at a time when his fellow countryman, Jan Garbarek, was becoming less interested in releasing new music.

As they both played the same instruments it was all too easy to see the younger man as Garbarek’s heir apparent, but this is to do Seim a disservice.

While the Seim’s music can also be far reaching from quartet and quintets playing a distinctly European jazz to free music, along with music drawn from the Middle East, there the similarity ends.

Seim has retained a fascination for acoustic music and the influence of the human mind and breath to produce music of exquisite beauty and delicacy.

His astonishing debut album introduced a large ensemble that seemed to breathe as one, with sounds that could be ethereal, or strangely disturbing, but always beautiful.

If you’re looking for more, check out our pick of the best saxophonists of all time here, or our round up of the most essential jazz musicians in history.